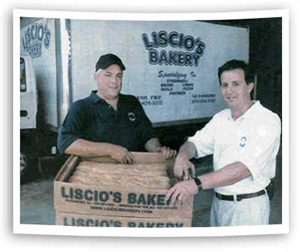 Our Plant and Office

Watch Our Segment from Food Quest

Liscio’s Bakery was founded in January of 1994 by James Liscio. After working in the baking business for 14 years, James Liscio followed his dream of owning his own bakery. With the help of his wife (who was expecting their first child), his mother, brother, and grandmother Liscio’s Bakery opened its doors in February 1994. Liscio’s original store is located on the Black Horse Pike in Sicklerville, NJ, in what has now become Liscio’s Bakery & Deli of Cross Keys. Liscio’s original customers still remember his grandmother, who was 84 at the time, sweeping the floor and chatting with all the customers. Since that time his grandmother and mother have passed on leaving him a strong work ethic along with many great memories. Liscio’s Bakery is still a family run business, and still strives every day for the same quality, consistency and enthusiasm that was used to bake the very first loaf of bread.

Producing Italian breads and rolls for a few wholesale accounts, as well as for the store’s retail customers was James’ humble beginning. However, many wholesale customers began to see and experience the constant quality of product that Liscio’s is now famous for, and sales began to climb. By 1998, Liscio’s quickly outgrew its 2,800 sq. foot facility at Cross Keys and found a bakery in Glassboro that was more than double the size. Liscio’s moved its bread production and added a new retail location to what was Liscio’s Bakery of Glassboro, located on High Street. With nearly two times the space, Liscio’s now felt more prepared to handle climbing sales. Liscio’s settled in, feeling confident that their newest home would prove sufficient to handle the growing demands for years to come. This, however, was also about to change.

Sales continued to climb and in 2001, Chad Vilotti, who was the ingredient supplier for the bakery and dear friend of James, sold his company (Vilotti Food Ingredients). Chad’s great grandfather was one of the first Italian Bread Bakers in Philadelphia and was the founder of Vilotti Bakery. Chad Vilotti joined forces with James Liscio to pilot the companies expanding future. After working together for nearly a year, the two concluded that a larger, more centrally located facility was needed in order for the bakery to expand and handle the future plans they envisioned. After searching near and far for a location to handle its future, James and Chad found exactly what they were looking for and it was right around the corner. In April 2004, Liscio’s Bakery moved to its production facility to 128 South Delsea Drive in Glassboro. Simultaneously, they built a new retail store in Washington Township on Egg Harbor Road. This location was also their first attempt at what is now a successful bakery and deli. With the success of adding a deli to their newest bakery location, the original Liscio’s Bakery location at Cross Keys was given a facelift to include a deli as well. Both stores now not only provide the public with bread, rolls and pastries, they now offer deli items, ready-to-go entrees and a fine selection of the best Italian specialties.

June 14, 2016 marked the official Grand Opening of Liscio’s brand new state-of-the art facility at 600 Ellis Avenue in Glassboro, NJ as part of the Grow New Jersey program. The current plant has the most sophisticated and efficient equipment available anywhere. Liscio’s Bakery continues to grow and expand and is now poised to handle expansion into new territories as well as satisfying its current ones with quality baked goods and service.

Liscio’s slogan is “it all starts with the bread”, but our business starts with our families, our friends, our employees, our distributors and our customers. James and Chad couldn’t have done it without them! Our goal remains the same as it was when the business began: to produce the best quality baked goods anywhere!